I’m late with last week’s ring because it turned out to be a lot more involved than I thought it would be.

The “Ring a Week” group moderator put out a challenge a few weeks ago to do a kinetic ring. WOW! I figured it had something to do with movement.  I had many ideas, but my first was to do a zoetrope, and I kept going back to it. Initially, I wanted to make one of the traditional ones, like this:

Except that I would scale it down for the ring of course. But while I was doing some research to try to figure out how to build the ring, I came across a few videos that completely changed my direction. Here they are:

This is by Jim le Fevre. I think he was the first to come up with the idea of this 3D zoetrope on a turntable running at 45rpm.

The other video was from Tim Wheatley, using a bicycle wheel:

This one nailed it for me. I was hooked, and I really wanted to do a 3D zoetrope ring! Pretty soon you know, it was no longer about the ring, but about the process and trying to figure out how to make it, and how to adapt it to a ring.

I made a test model with a copper disc that could freely spin, but I couldn’t figure out how to make it spin at a constant speed. The whole idea is actually a visual trick that you cannot see with the naked eye. It has to be on a video with a high shutter speed (otherwise you’ll get mostly a blurred effect.) This is when I decided the whole ring had to spin, perhaps on my flex shaft. After a bit of old fashioned trial and error (no fancy math here),  it all came together pretty quickly. Here is the ring, stationary: 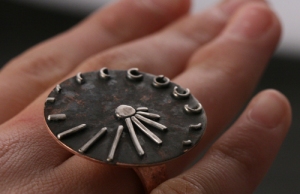 Mark helped a lot with filming it. We borrowed a friend’s fancy digital video camera and played around with the settings until we got it right. Then I had to get a crash course in iMovie to edit the darn thing (that’s why I was late…) And here is the result, spinning!

This project was so much fun, I can’t wait to try another ring like this, maybe a little fancier. I also learned a million things, here are a few: